Climate change (also known as global warming) is the change in the state of the climate, identified by the average variability of its properties which persists for decades or longer (1). One of the biggest indicators of climate change is the increase in the global temperature, which has been known to fluctuate but is now observed to increase at an accelerated rate that has never before been seen.

The process responsible for climate change is called the Greenhouse Effect. It begins when light from the sun hits the earth.  Some of the sun’s energy is reflected into space, but some is absorbed by the earth and radiated as heat. This heat is absorbed by greenhouse gases which act as a barrier that prevents the heat from being reflected into space. This is a natural process and it is the reason we can sustain life on Earth without freezing. However, since the Industrial Revolution, humans have been releasing an excess of greenhouse gases, increasing the “heat-trapping” effect on the earth (2). 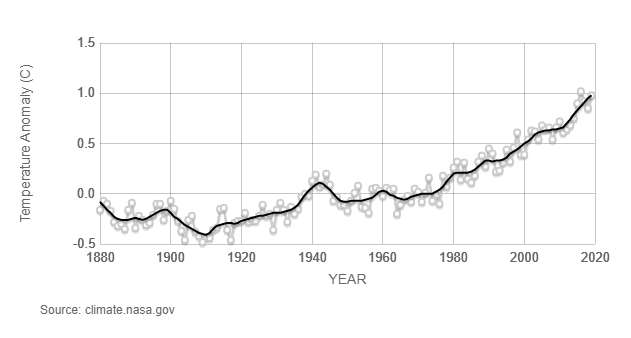 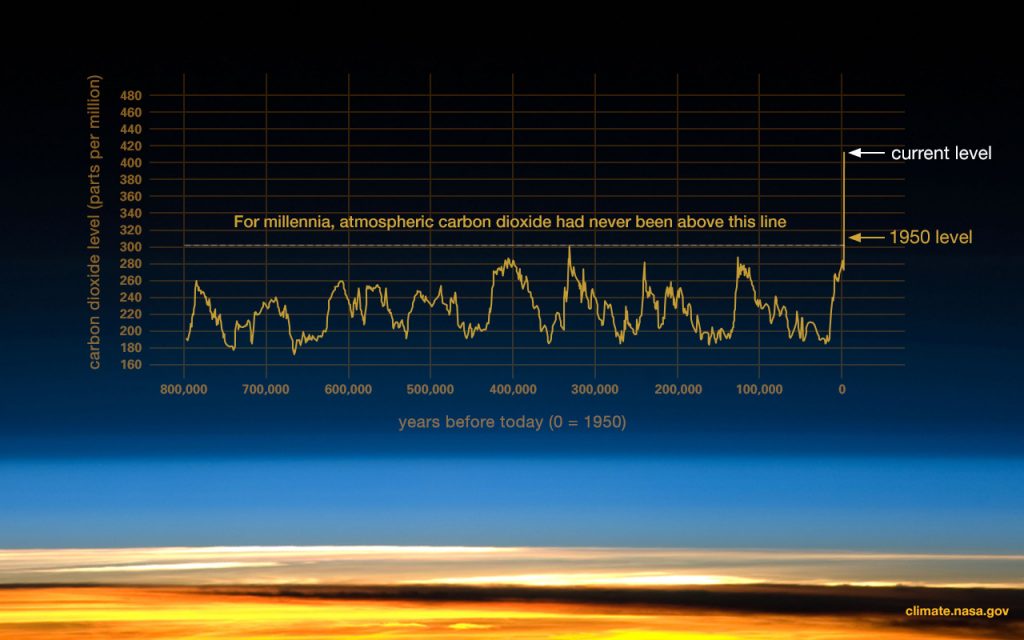 The most significant greenhouse gases are water vapor and carbon dioxide (CO2), but others include methane, nitrous oxide and ozone (2). Humans contribute to the addition of greenhouse gases in our atmosphere by emitting large amounts of CO2, mostly by the burning of fossil fuels (coal, oil and gas), production of cement, flaring (combustion) of natural gases, and deforestation (2). Levels of CO2 are much higher than they have ever been in millennia.

The increase in greenhouse gases and consequential warming of the earth has had and will continue to have, large impacts on the earth and its inhabitants. General climatic changes may include increases in mean temperature in most land and ocean regions, extremely hot conditions in many inhabited regions, sea level rise, and extreme weather events (3). Changing precipitation or melting snow and ice can alter hydrological systems, animal species experience shifts in their geographic ranges, seasonal activities, abundances, species interactions and migration patterns, and crop yields are impacted (4). Another effect of pertinence to our research is ocean acidification. See Ocean Acidification article.

El Niño or El Niño Southern Oscillation (ENSO) is a weather phenomenon in the tropical Pacific. It was first noticed by Peruvian fisherman during December, thus the name El Niño, ‘the boy’ in reference to Christ child (7) (8).

This phenomenon occurs every 3-7 years and is caused by a change in the wind direction which is now pushing warm western water masses towards the east. It brings heavy rainfall to the normally dry coastal regions of South America and regions in the Pacific with high rainfall are experiencing droughts (5) (6) (7). These weather changes can have social-economic consequences on food supplies and pricing, forest fires and can have influences in economic and political decisions (8).

Three ENSO states in regards to the oceanographic and atmospheric settings can be described.

Normally under ENSO neutral conditions, the Southern Pacific is dominated by a subtropical high pressure area in the eastern South Pacific with cool dry air and the Indonesian low with warm moist air that rises upwards. The difference in the strength of these pressure systems determines the speed of the Southeast Trades between them (air travels from the high pressure systems to the low pressure systems and creates wind). There is also a gradient in sea surface temperature of the ocean between the warm western tropical Pacific and the cool eastern South Pacific, where cold nutrient rich waters are upwelled on the eastern continental boundary and at the equator (5) (6) (7) (9).

In an El Niño event the South Pacific high becomes anomalously low and gets less strong. On the other hand the Indonesian low has anomalously high pressure (i.e. is a weaker low than usual) and travels into the central Pacific towards the east. In conclusion to that the pressure difference and therefore the South East Trades between them weaken or can even get reversed. With the wind weakened or reversed the warm surface water intrudes towards the east. This is cutting off the upwelling cold nutrient rich water at the eastern boundary. Over Indonesia, rainfall tends to become reduced while rainfall increases on the west coast of South America and over the tropical Pacific Ocean (5) (6) (7) (9).

The third ENSO state is the reverse of El Niño conditions called La Niña. La Niña conditions manifest with a greater cooling at the eastern boundaries and strengthening of the pressure systems so that the Southeast Trades become even stronger. Over Indonesia, rainfall tends to increase while rainfall decreases over the central tropical Pacific Ocean (7) (9).

The effects of these changes can be seen on large parts of the globe, regions in the Pacific with high rainfall are experiencing droughts and in regions with normally dry conditions, heavy rainfall can cause floods or mudslides. Cyclones form more frequently and form further in the East than normal. The influence on the atmospheric circulation and water transport can also have global effects for example the south east of the United States experiences cold and rainy winters during an El Niño event, while winter in New England are getting milder. These changes can have social-economic consequences on food supplies and pricing, forest fires and can have influences in economic and political decisions (7) (8).