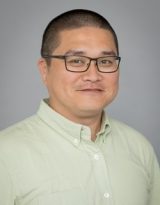 Made in Taiwan and raised in sunny California, Henry’s initiation into marine research came at the University of Southern California – Wrigley Institute for Environmental Studies on Santa Catalina Island as an undergraduate assistant holding bags of dead kelp bass while floating in the water for researchers investigating population genetics and recruitment dynamics. His enthusiasm for the marine environment got him involved with corals and climate for his Masters thesis in Philadelphia, Pennsylvania at the University of Pennsylvania under the supervision of Prof. Andréa G. Grottoli. He then moved on to New York to complete his PhD in Atmospheric Science – Climate Change under the supervision of Prof. Braddock K. Linsley (Lamont-Doherty Earth Observatory of Columbia University). He settled in Bremen, Germany in late 2010 as an independent postdoctoral researcher, MARUM Fellow, at the MARUM-Center for Marine Environmental Sciences – University of Bremen searching for possible climate related causes of the Maya Collapse. He went on to complete a 2.5-year research stop in Paris, France enjoying the sights, sounds, and of course the food at the Centre national de la recherche scientifique (CNRS) and L’Institut de recherche pour le développement (IRD; The Research Institute for Development). In the fall of 2017, Henry returned to Bremen by joining the ZMT to establish his Junior Research Group.